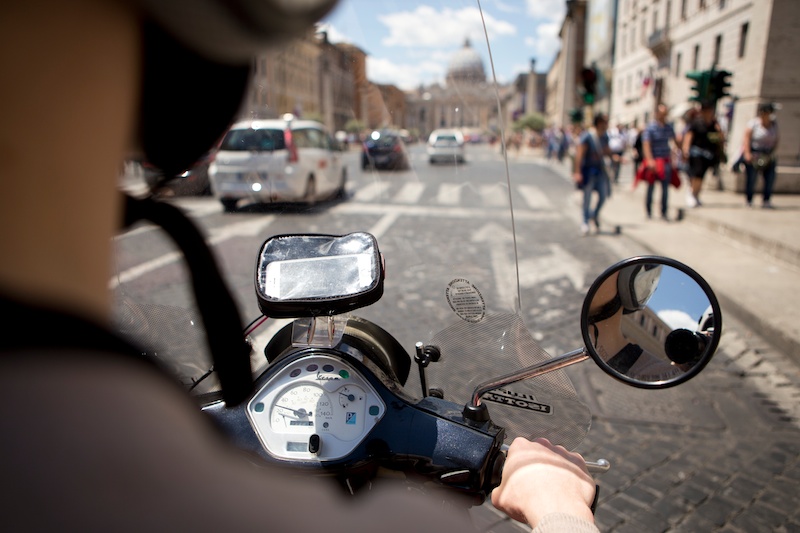 EN
Vespa Tour Rome. What more stereotypical can you do than renting a Vespa when in Rome? Rome’s traffic is said to be terrible during the week but on weekends the streets are nearly empty. But we both weren’t afraid of driving and I mean, I survived cycling through the Parisian traffic for a year.

Since we’ve been walking on the other days a lot it was so comfortable to enjoy Rome on a Vespa. And for navigation you can either load your google map on your phone beforehand or rent a GPS.
We started our tour with driving to San Pietro. Gosh, the queues were so long. Apparently, a lot of people prefer taking the stairs for free rather than taking the elevator for 7€. So if you’re impatient as I am – take the elevator! Generally speaking, I don’t understand people who are queuing 70% percent of their visit. Afterwards we drove up the Passeggiata del Gianicolo for a great view over Rome. The next stop was lunch in Trastevere, which also included another icecream at Fior di Luna. I also discovered this great sandals shop called Di San Giacomo where you can create a pair of handcrafted ones. Later on we drove up to the Giardino degli aranci where have another great view on San Pietro but also on the Altare della Patria. And don’t forget to look through the keyhole!